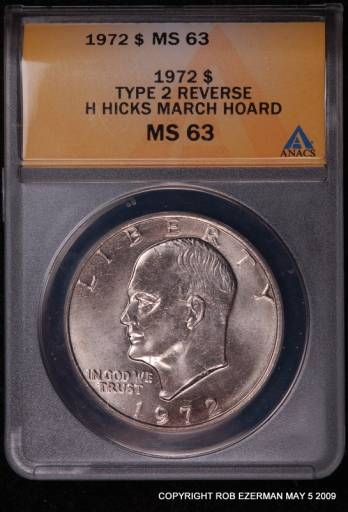 The IKE GROUP is delighted to publish John Roberts’ article on his discovery of additional markers  for Herb Hicks’ March 1972 T2 Ikes.  These markers will allow identification of March T2’s struck before the reverse die started to crack through “STATES” and thus allow separate attribution of March and August 1972 T2’s in all die states and most conditions. Read Robert’s ground-breaking article below to see his photos of these markers in early die states before the die crack is present.  We note John’s key comment:  “as the pattern of cracks noted by Hicks progresses, these markers weaken but still remain visible once recognized”.  Bottom line:  thanks to John we can now separate March from August Type 2 Ikes, period.

The ANACS-holdered Type-2 Ike pictured above and below was attributed by John and will be sold on eBay in a celebratory auction.  This brilliant example is in early Middle Die State with the reverse die crack clearly present:  of John’s March Type-2 obverse die markers, the die-dig dimple tucked under the N of IN is naked eye/loupe visible while the die scratch north-west off Ike’s neck at the level of the middle arm of the E of WE is barely present and camouflaged by die flow lines (pictures below).

John is Director of Attribution Services at ANACS.   He has authored numerous numismatic articles thirteen of which are posted on the ANACS Web Site, WWW.ANACS.COM.  One of our Country’s most respected attributers, John is known for consistent and accurate grading, for his skillful coin photography and for the breadth of his numismatic expertise

What is not well known is John’s affection for the Eisenhower Dollar and his support of IKE GROUP activities including our recent project with ANACS to honor member Herbert P Hicks by attributing Herb’s March release 1972 Type-2’s as such.  The IKE GROUP is most grateful to both John and ANACS for bestowing this most meaningful honor on Herb. (Sure beats a letter of appreciation!) 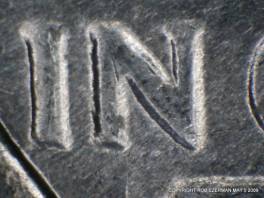 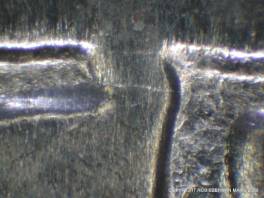 John’s markers in a later die state: die-dig below “N” of “IN” and early reverse die crack (only crack on this March T2).  The die dig is naked eye/loupe visible on this Ike as it is a reflective dimple. 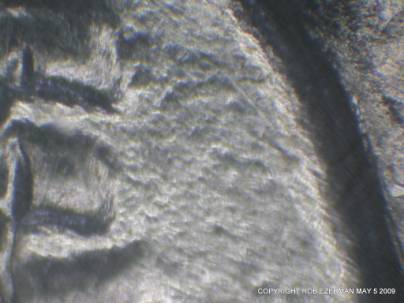 The neck die gouge is barely visible at this die state.

A few days ago, I had the opportunity to grade and attribute a fairly large group of 1972 Type 2 Eisenhower Dollars acquired by a veteran collector directly from banks around his home in March of 1972. His coins were all from a single die marriage. With multiple examples to base comparisons on, I was able to identify several die markers that should be visible in the most commonly encountered grades and in virtually any stage of this ‘March’ marriage.

Some Ike variety specialists also recognize a later release of the 1972 dollar with a Type 2 reverse, commonly referred to as the ‘August’ dies. In my personal collection, I had several examples of 1972 Type 2 Ikes that were clearly from a different die marriage than the ‘March’ pieces I was examining. My pieces also displayed a characteristic that indicates they were produced by a reverse die manufactured by a later hub stage than the ‘March’ reverse die. 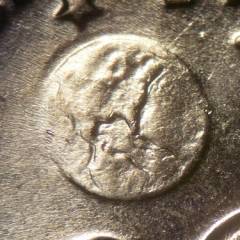 The Earth on a Type 2 reverse is recognizable by the incuse lines that form the islands off Florida’s coast.  This hub was originally intended for use on proof coinage only.

This earlier marriage is most readily identified by a series of progressively growing die cracks thru the tops of the letters of STATES. This characteristic was noted by Herbert Hicks when he discovered the use of a proof hub for some of the business strike coinage of the 1972 Philadelphia mintage. Hicks’ discovery of the hub type and the specific die is described in detail in his article Eisenhower Dollar Varieties which appeared in the April 1974 issue of The Numismatist. I wanted to be able to identify this specific marriage in stages that precede the noted cracks and located several previously unlisted characteristics of the dies.

The ‘March Dies’ may be identified by several markers. 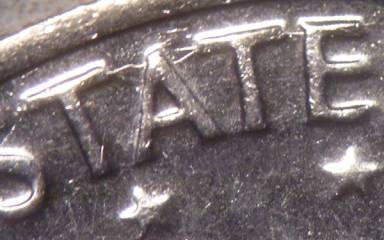 The pattern of die cracks thru the letters of STATES in an advanced stage.  These cracks were noted by the discoverer of the type and this specific die and appear on 70-80% of March Type-2 Ikes. 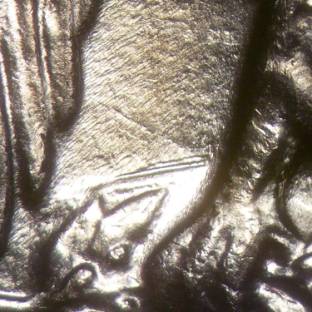 There is a double incuse line that forms the Moon’s horizon to the left of the eagle’s leg. This feature is also found on the August die, but it is much weaker. It does not appear to be present on the proof coinage, but other similar incuse lines are found on the horizon to the left of the outside of the wing and to the right of the tail feathers. These other smaller ‘outer horizon lines’ are found on every version of a Type 2 reverse die that I’ve seen. I also examined several 1972-S ‘Blue Pack’ uncirculated specimens and very faint traces of the ‘central’ incuse lines next to the leg were seen on the examples I observed. These central horizon lines vary in strength among 72-S ‘Blue Pack’ specimens. I suspect this doubled line was in the hub itself, but not visible on the proof dies due to the heavy polishing they received. 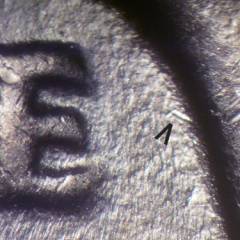 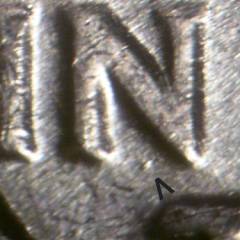 The obverse of the ‘March’ marriage has a short diagonal die scratch pointing up to the left from Eisenhower’s throat that is even with the center stroke of the E of WE. There is also a small die gouge ‘dot’ under the lower opening of the N of IN. Both are rather sharply defined on earlier stages of this die. As the pattern of cracks noted by Hicks progresses, these markers weaken but still remain visible once recognized.

Based on conversations with other specialized collectors of Eisenhower Dollar varieties, one member of what has come to be known as “the Ike Group’ took a closer look at some of his pieces.  Several years ago, while searching rolls of 1972 Eisenhower Dollars he had originally purchased and set aside in 1973, Rob Ezerman discovered a second die marriage employing the Type 2 hub. Based on the mix of Type 1 and Type 3 reverse examples also found in these rolls, Ezerman deduced the pieces were struck around the time the ‘normal’ reverse hub was changed from the Type 1 to the Type 3 design. He estimated coinage would have been released to the public around August 1972.  The ‘August Dies’ are a different marriage and I was able to note the following markers. 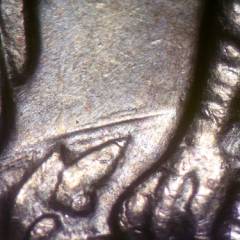 The incuse lines to the left of the eagle’s leg are weaker on the ‘August’ die, suggesting a later use of the same hub. Further research may determine if this difference is due to hub wear or die polishing to partially efface clash marks found on about half of the ‘August’ examples. The several pieces I examined were all clashed with faint die polishing lines passing over this incuse portion of the horizon. 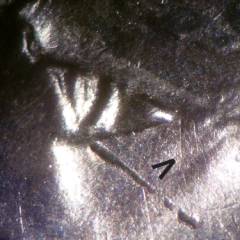 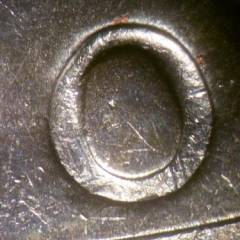 There are two almost perfectly vertical and parallel die scratches at the back of Eisenhower’s eye. The reverse die may be identified by a die gouge ‘dot’ found inside the O of DOLLAR. I would like to examine unclashed examples of this marriage, but I suspect both these markers would be present – they appear unrelated to the polishing of the dies to smooth out a clash mark. 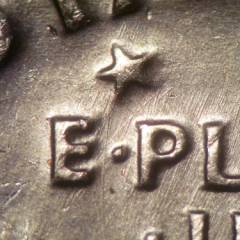 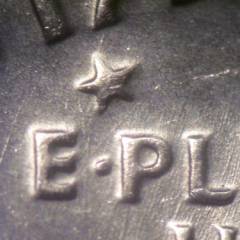 Two slightly different stages of the reverse showing die polishing over a clash mark. Ezerman notes that about half of the ‘August’ examples have a weak single clash that was partially abraded away. This pattern of lines around the E, dot, star and PL of PLURIBUS will be found on most, but not all examples of this reverse die.

While the ‘March’ and ‘August’ designations may be estimates and subject to debate, such contention is largely of little relevance. The numismatists that discovered these respective dies based their conclusions on reasonable assumptions.  It is far more important to note they represent specific and separate die marriages that are identifiable in any stage in virtually any normally encountered state of preservation. I would be happy to certify any example of the 1972 Type 2 as either ‘March Dies’ or ‘August Dies’ if specifically requested. Many Eisenhower Dollar specialists will undoubtedly desire examples from both marriages of what is widely considered the ‘King of Ikes’.