The IKE GROUP has proposed a three-tier grading system for all die-clash images.  Please go to this introduction: A Die–Clash Grading System .

THE “UPSIDE DOWN U” DIE CLASH IMAGE

The most recently discovered die-clash image, the Upside Down U (UDU) is the most difficult to see and to photograph:  you’ll miss it if you don’t thoroughly rotate any Ike that shows other signs of die-clash while looking for the UDU.

Visualizing these two reciprocal clash images is a good test:  if you “get it”, you are indeed an advanced die-clash student!  (I have to figure it out each time, LOL:  which way does the E point???)

Sometimes the top of the UDU image is recessed quite deeply in the field but the rest of the U doesn’t show up.  Other times the U is more complete but shows little or no depth. The U is always “partial” but we use “Partial UDU” when less than half of the U is visible.

The die setters at all three Mints abraded the UDU image very aggressively, at times undermining the top arm of the adjacent E of WE in that process.  Now that we can explain this “Clipped E”, we can leave behind this feature’s previous wild and weird theories. 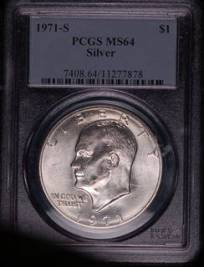 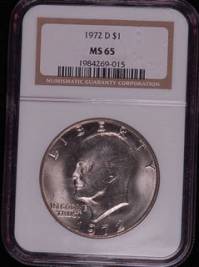 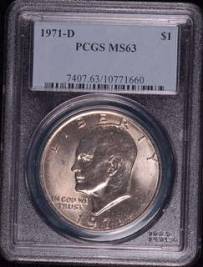 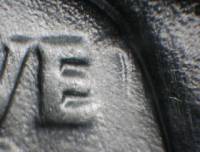 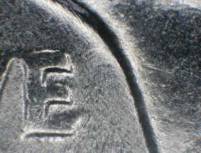 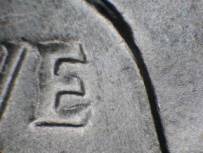 The “UDU” is a very recent discovery by the IKE GROUP and we are just now getting a feel for its prevalence:  while scarcer than any of the other die-clash images, it is not rare.   We cheated a bit with this GRADE A example because this one is about as strong as the image gets and therefore does not display the minimal features of a GRADE A.  In time I’ll add a photo of a minimal-standard GRADE A  –  for now picture an UDU about half way between this A and the B.

The GRADE A example is a ’71-S Silver Ike.  This U is about as complete as you will see since it usually tucks behind the E and the bust, and the U is a bit smaller than the E.

The GRADE B example is smaller and not as deep but this one is visible at most angles sue to the texture change under the U so it gets a “B”.   Did you notice that the top arm of the E is a bit clipped (compare to the GRADE A example)?  Its likely that the upper left downward continuing sweep of the U was progressively deeper and the die setter under-cut the upper arm of the E in order to erase that part of the U.  As you can see in the picture the abraded UDU ends abruptly a few MM’s before the upper arm of the E.