The IKE GROUP has proposed a three-tier grading system for all die-clash images.  Please go to this introduction:  A Die–Clash Grading System .

The “Moon Line” is the image created by the top of Ike’s head.  Running across much of the lunar surface, it is usually not abraded as heavily as clash images that cut across the field.  The line tends to skip across the moon as the lunar surface is variably slightly below the plane of the field.

It’s fun to see the image cut across the larger left-and crater floor where it is even less likely to be abraded.  This location often reveals the clearest evidence of a “multi-bang” clash episode (typically close, parallel lines of the same thickness) or of multiple separate clash episodes (typically separated lines of different thickness). 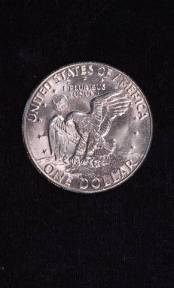 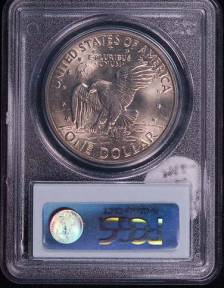 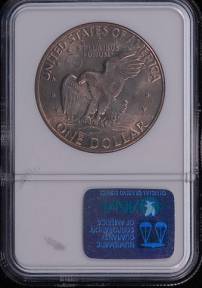 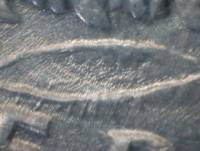 The GRADE A example has a crisp, fine line that extends forcibly from the lunar floor across the crater floor.  Note that the image never crosses over the rim of the crater as this feature is quite incuse on the die and beyond the “reach” of the clashing obverse die.

The GRADE B line is not as crisp (it may be a double or triple and it is very light between the two L’s of DOLLAR).  It looks quite strong in this picture but only at this one angle of lighting and camera.

Can you see that the tops of the two L’s could leave a reciprocal clash image on the obverse?  In fact, these two reciprocal images do occur and are located on either side of the left leg or the R of LIBERTY:  their abrading is the cause of the CuNi-clad die state peg leg.