The IKE GROUP has proposed a three-tier grading system for all die-clash images.  Please go to this introduction:  A Die–Clash Grading System.

The Hair Lip image is a short, usually thin, upward curved line hanging off Ike’s lower lip.  It is caused by the leading edge of the Eagle’s left (our left) wing.

GRADE A Hair Lips stand out on naked-eye inspection and are distinctly unusual.  Curiously, the Hair Lip can be difficult to see with loupe and microscope though the latter can be helpful to visualize short “Hair Lip Stubs”, a result of a die-setter’s reluctance to abrade close to the incuse cavity of Ike’s lip lest he enlarge it.   For the most part, the Hair Lip was thoroughly abraded by die setters:  these guys (no women back then) were very, very good at erasing Ike clash images as you will realize if and when you start searching for unabraded images, LOL!

All the Ike Die-Clash images show best with rotation under a grading light:  minimally abraded Hair Lips will catch the light at certain angles and appear as a sharply etched thin line that stands out starkly from the field.

No different than the other Die-Clash images, the Hair Lip can be doubled, tripled and more, especially the Denver Ike Hair Lips since those Columbia Ike presses did not have automatic shut-offs. 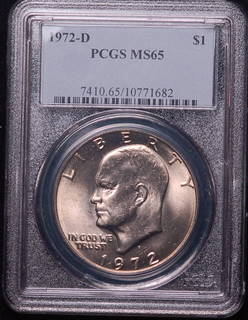 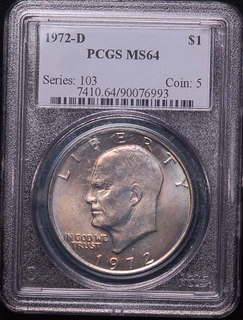 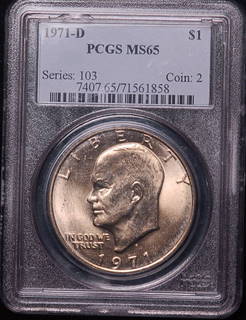 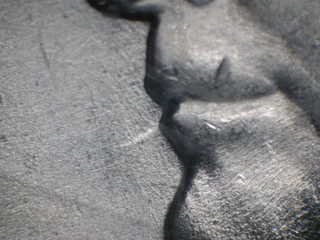 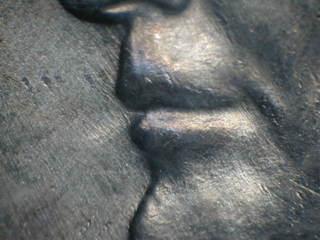 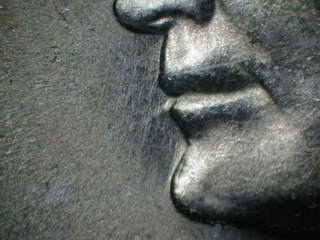 The GRADE A example is full length and sharp.  Upon rotation the Hair Lip catches the light with brilliant reflectivity that cannot be conveyed in any single static picture.

The Grade B is an abraded double Hair Lip so one would check this Ike carefully to see if there are any other doubled clash images.  One could argue that this is also a GRADE A example but I dropped it to B because the abrading dulled the image: however interesting to see a clear double, it is not sharp.

The GRADE C is heavily abraded and barely visible beyond the strong “Stub”.   Go back to the GRADE A picture  – do you notice the image thickens the closer one gets to the lip?  Hair Lip “Stubs” can be quite meaty since the clash image itself is heavier at the incuse edge of the lip and because the die setters were reluctant to abrade heavily at the edge of any incuse device lest the design be modified.