The IKE GROUP has proposed a three-tier grading system for all die-clash images.   This proposal is at the heart of our article published on CONECA’s Web Site,

which is also a superb introduction to die clashed coins in general and Ikes in particular.

In this article we used die-clashed Ikes to illustrate our three proposed grades:

GRADE A  –  jumps off the coin, sharp, crisp and substantially complete;
GRADE B  –  visible at most angles and at least mid-sized;
GRADE C  –  barely visible at just the right angle or tiny.

The article is a fairly large pdf file, takes about 30 seconds to download on a high-speed connection and there is nothing on your screen to indicate progress so just be patient and maybe give it a minute.  The IKE GROUP is grateful to CONECA and Ken Potter for its publication.

Why use Ikes to illustrate our Die-Clash Grading System?

No other modern series has the quantity of die-clashed coins and no other series has such remarkably consistent and recognizable clash images.  Yet these images vary widely in their prominence and size so creating a simple grading scale was a no-brainer.  Our proposed grading system has utility for all series but its use with die-clashed Ikes will prove especially helpful as collectors become better acquainted with Ikes.

What should I expect to see on die-clashed Ikes?

Don’t expect too much!  While some Ike clash images are robust and seem to jump off the coin, the majority take a little coaxing in the form of “rotation” under a grading light.  Rotation will bring out the angles at which the light reflects off the edges of the image and suddenly, there it is!

The strongest clash images (our GRADE A) are easily seen at most angles but even so the images are not large so pictures need to be on the order of X2 to X5 magnification (the equivalent of a low-power loupe) to bring out most of them.  Exceptions are brilliant Hair Lips and Talon Heads that can jump off even your typically weak ebay photos.

As a rule of thumb, with coin or holder in hand, you need young eyes that can focus as close as six inches or a loupe to see most die-clash images.  You also need to develop the skill of rotating a coin while looping it, really not that difficult.  In fact learning to really “see” Ike die-clash images uses the same skills one needs to grade coins.  Most clash images are easier to see than the subtle hair lines that reveal prior cleaning, a feature you can not afford to miss, LOL.

Is there any flexibility in your die-clash grading?

The IKE GROUP recently decided that the grading of each clash image should reflect the range of expression of that image.  For example, in our CONECA Web Site article, we used a 1971-S Silver business strike (SB) Talon Head to illustrate GRADE C, even though that particular example was a whopper for an SB Ike.  We now propose that the SB Ike Talon Heads should be graded with respect for their range of expression so the very strongest examples would be GRADE A, including the one used to illustrate GRADE C in our article.

Another example:  the “Upside Down U” (UDU) clash image is never “substantially complete” in absolute terms as the UDU is squeezed between the E of WE and Ike’s neck so it is always partially covered up, even when fully expressed (very rare, by the way).  It would make little sense to relegate the strongest UDU images to GRADE B.

Tell me more about how die clashes occur?

Ike Die clashes occur when the “feeder finger” of a Columbia Press (the two-chamber press used to Mint Ikes) either jammed or became loose so fresh planchets were not fed into the coining chamber:   the dies therefore came together without the cushioning of an intervening planchet.

Without a planchet in the chamber, the dies strike each other and each die imparts some of its design to the other die (please see the linked article at the top of this thread for a more detailed explanation).  The “die setter”, a highly skilled mint worker would remove the clashed dies and erase (abrade) as much of the clashed images as possible without distorting the die and usually put them back into service, often still paired.

At the Denver Mint up to six clash “bangs” could occur before the press shut off or was shut off, thus we have occasional single-episode, multi-bang clashed Denver Ikes.

Here is a photo of the larger left hand crater on the reverse of a clashed Ike with multiple Moon Lines, possibly involving two or three separate clash events.   The upper line is probably a double-bang and the bottom three lines possibly two separate events since the upper of the three lines appears to be different than the two bottom identical lines: 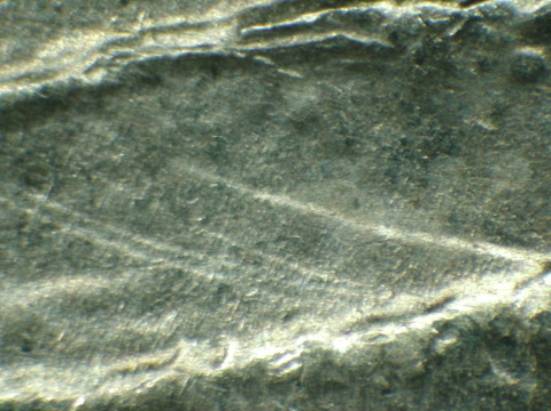 Mostly, however, the first forceful “bang” of a die clash would free the jammed feeder finger and minting would continue without pause.  At the Philly Mint, the Columbia Presses had automatic cut-offs installed so a multi-bang Philly Ike is very uncommon

You might wonder why both dies didn’t impart all of their design on each other at each clash?

–          The dies are set to strike their images into planchets, not to flatten the planchets, LOL!  The travel range of the dies is not intended to bring the dies into contact with each other, but their velocity does just that when no planchet is present.  The force of a die clash, therefore, is not full strike force of over 100 tons per square inch, but rather more like an explosive, high-velocity impact.  This fact, by the way, explains the sharp outline of the typical fresh Talon Head image even though it is caused by a rounded nubbin on the reverse die:  the high velocity impact of that rounded nubbin creates a sharply defined “splash” kind of wave formation on Ikes temple that creates the Talon Head image: 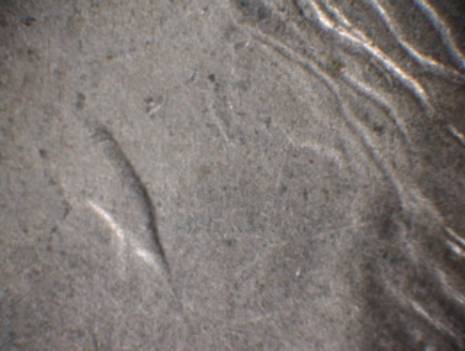 –          The fields of both dies are not perfectly flat:  there is some minimal intentional “basining” (rounding, like a very shallow telescope mirror) and inevitably some unintentional loss of flatness as working dies are repeatedly hubbed and then as they age (“die sink”, for example, was a major problem for 1971 and 1972 Ike dies).   Remember it is the fields of the dies that clash so if they are not perfectly flat when they strike, there will be substantial areas on both dies that will not strike the opposing die.

–          The Columbia presses were severely taxed by the large, heavy Ike planchets and thus began to fall out of adjustment and develop some slop in their movements from the very first strike.  If the clashing die faces were not perfectly parallel to one another at the moment of contact only some of the clash images would strike up.

–          This one is a bit tricky:  the fields adjacent to incuse design elements would be subject to greater clash forces.  Thus clash images tend to be deeper and fuller the closer they are to their own design cavities and trail off from there: 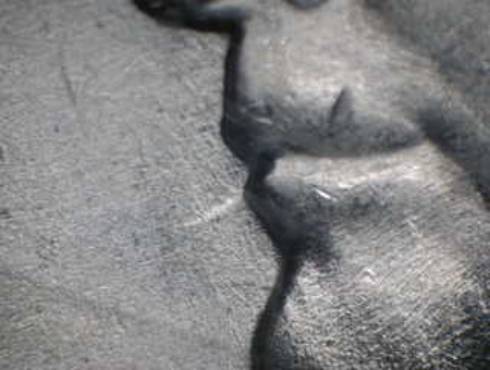