The existing Third Party Graders work out of “black boxes”.  For the most part, their decision-making criteria are not known and how a given grader or group of graders make a particular decision is seldom revealed.

The reason is understandable:  the stakes are often very high and there’s enough stress on graders without requiring that they explain their decisions to submitters.

The IKE GROUP is in a much different position.  Our mission statement emphasizes transparency and interaction with Ike collectors and submitters.  This does not mean we can be pressured to make a given decision:  it means that we feel a responsibility to explain our decisions and thereby encourage discussions and participation in our DIVA Attribution process.

From time to time on this Forum Topic the IKE GROUP Attributors will report on a difficult decision (unless the submitter requests otherwise, that wish would always be respected):  it is the difficult decision that has the most to teach us all.

The submitter thought at least two were not peg legs but in a email conversations I had with the gentleman prior to submission, we agreed that it would be worth while to document these three even if they were “Almost” die-state peg legs.  The DIVA Attribution Program is flexible enough to report in shades of grey when appropriate, when it helps advance our understanding of the Eisenhower Dollar Series and when it is likely to stimulate discussion from which we can all benefit.

Decision made.  One of your three 73-S Ike SP’s satisfies the IKE GROUP that it meets die-state peg leg status.

I’ve drawn what I’m seeing, will enclose a CD of photos:   as I wrote yesterday, the left foot is indeed missing part of its “ankle” on your two “almost peg legs” so the appearance is serif-like and that’s a problem.

In the photos of your first of three, you can see a little bit of frosting hanging off to our far left that took it down in my eyes, not a difficult call yet it’s thrilling to see such a strong example of die-polish producing a 73-S SP  “Almost die-state peg leg”. 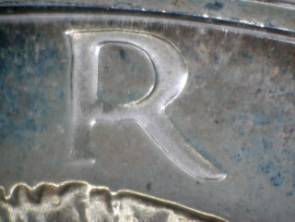 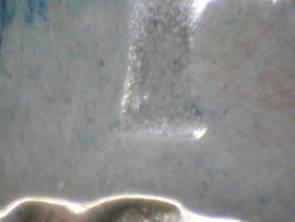 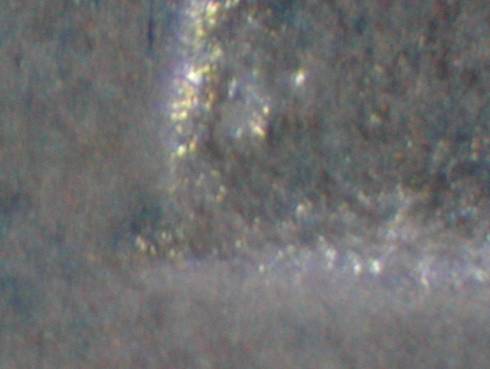 Your second 73-S Ike proof, the other “almost” peg leg, is similar.  On this one, however, the left foot could be within the outline of an Eskimo boot peg leg*.  But, its appearance gives us pause and the firm opinion of the GROUP as a whole was “No, sorry”.  Please see photo of a 74-S Eskimo Boot Peg Leg at end of this report.

“Eskimo Boot” is the basic shape of all the 74-S Ike proof peg legs and presumably this shape applies to 73-S peg legs as well:  the point is there is a gentle rounded flare off both sides of the foot in “Eskimo Boot” configuration so if any remnant of the foot is within this putative outline, that proof could be a die-state peg leg even though its appearance might suggest otherwise.  This could be a tough call.

The almost invisible presence of a looks-like left serif on this second 73-S Proof Ike that seems to project outside a putative Eskimo Boot outline, however, is a feature we can not ignore.  This “maybe-serif-remnant” is very hard to photograph:  the two bottom photos are somewhat juiced.  It would be easier if there was no field toning.

So this second of three is a more difficult call than the first 73-S SP Ike but the IKE GROUP is unanimous (and I know you reached the same decision) that it does not make it to peg leg status.

*Please see photo of a 74-S Eskimo Boot Peg Leg at end of this report. 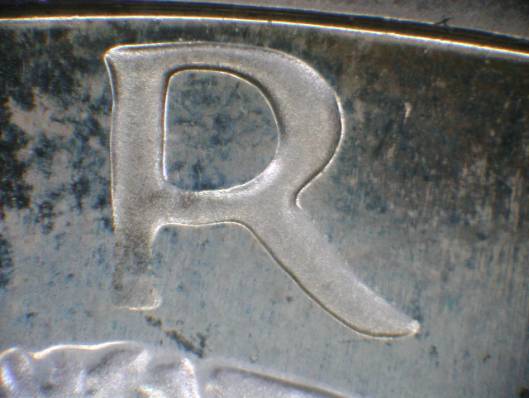 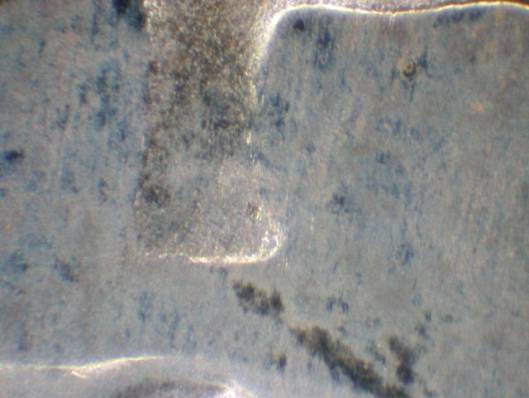 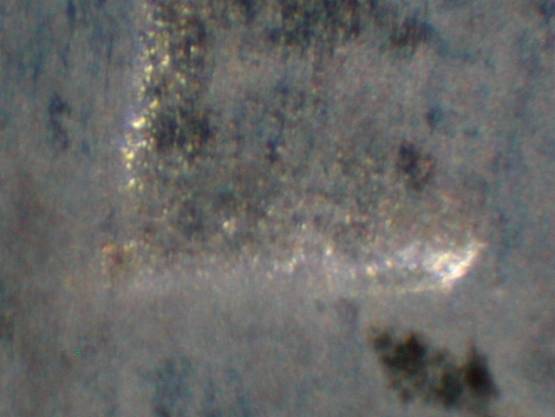 The variegated red spot off to our left and the 3 or 4 minute frosting specks hanging down from it, well, one can either ignore them or draw an Eskimo boot outline whose bottom is the bottom of the right-hand reflection and whose left border is a gently outward-rounded continuation of the upper left margin, in which case these isolated specks of frosting fall inside that outline.  The IKE GROUP unanimously feels, therefore, that we can Attribute this 1973-S Silver Proof as a die-state, die-polish peg leg. 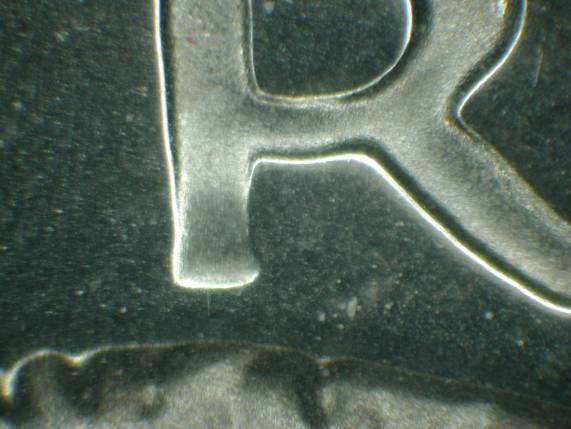