…were not approved (including Lincoln’s kneecaps)), we know he loved fine detail.

We also know that under severe time constraints and following his interpretation of the Bob Casey’s Congressional mandate, he basically copied the Apollo 11 Mission Patch for his design of the reverse of the Eisenhower Dollar:

For this he received some static and it is no wonder that in small ways he tried to make the design his own.  For example, in addition to the Apollo vehicles, Gasparro planted a flag on the moon (bet you didn’t know that!).  The flag is present on every high-relief non-Bicentennial reverse from Galvano through the 1978 Ikes. 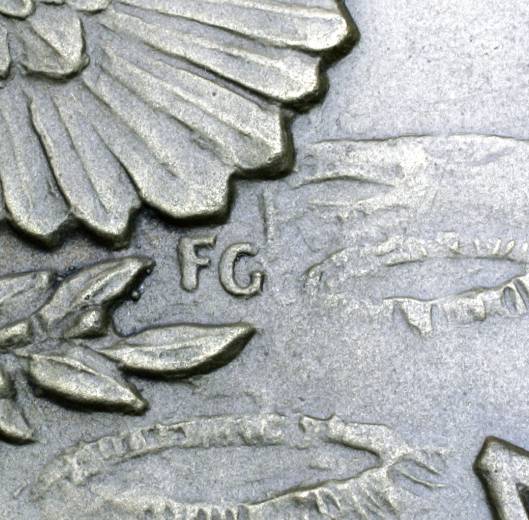 We also have good reason to believe that while he was passionate about his work, he also enjoyed a bit of numismatic mischief now and then.  We believe the presence of the Apollo 11 lift-off and re-entry vehicles on his two earliest and most important early Ike reverse designs is simply Gasparro at his best.

Ready for the story of the second batch of T-2’s, the “August” batch?

The authors have been searching for the T-2 for several years:  it is one of the prize “cherries” of the Ike series, worth around $100 in attractive AU and around $3,000 in attractive MS65.  Over the past few years the authors have cherried well over 100 T-2’s, mostly on the central East Coast and perhaps concentrated somewhat in southern Florida (the East Coast is the primary distribution of the Eastern Federal Reserve Banks that are supplied by the Philadelphia Mint, probably with a tilt (excuse the pun) in the 1970’s toward the gambling operations off the coast of Florida).

Our cherried T-2’s all have the same incuse “Shadow Ike” crescent on the reverse that Herb found on his March batch: 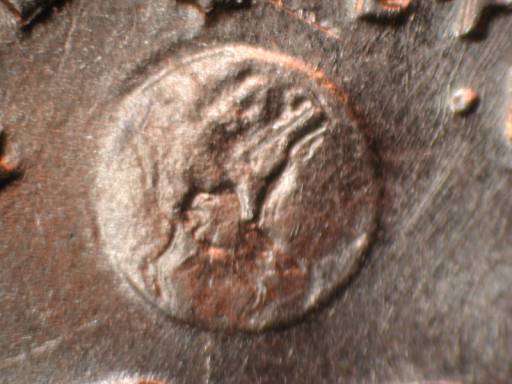 But about one half of our cherried T-2’s also have an identical small “Talon Head” (we call it a “Talon Tip”) (Figure 3c), a die-clash image in the center of Ike’s temple, along with die-clash repair die-abrasions on the reverse with a faint outline of Ike’s Jaw Line to the South and East of the Earth (Figure 3a and 3c). 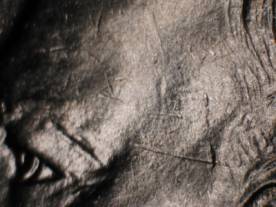 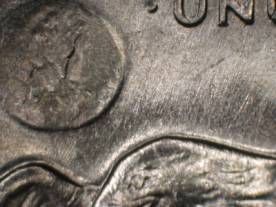 And here is where it gets interesting:  not one of Herb’s “stash” of March 1972 T-2’s has this Talon Tip image or any other indication of die-clash! And not one of our cherried Talon-Tip T-2’s has Herb’s die crack! 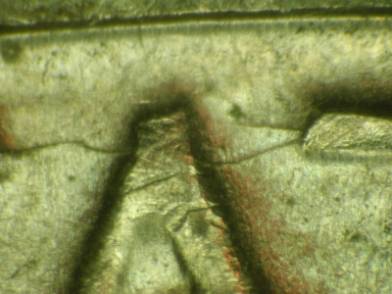 Based on these observations and on our research into die-clashed Ikes, we propose that the identical die-clash images on half our cherried T2’s is consistent with a one die-pair run distinct from Herb’s one die-pair die-cracked March run.

The die crack that appears on 80% of Herb’s March Boston T-2’s is distinctly uncommon on the T-2’s without die-clash we have cherried.  One of the authors found it on only two of his 25 plus cherried non-Talon-Tip T-2’s (mainly picked up between Baltimore and New Jersey).

Also, one of the authors recently opened three original 1972 (P) Ike rolls he had purchased in Philadelphia in 1973.   One roll had one and another two BU Talon-Head non-die-cracked T-2’s midst BU T-1’s and BU T-3’s.

Based on these observations, we believe our cherried one die-pair 1972 T2 was run at or near the transition from T-1 to T3- production in early August, with Federal Reserve Bank distribution favoring the middle and southern coastal States.

How large was this second T-2 run?  The frequency with which we have found Talon-Tip non-die-crack T2’s on the central and southern East Coast indicates somewhat more than 100,000 minted, with one author estimating twice that number.  An interesting possibility is the mint used the new more durable die-steel for the August T-2 High Relief reverse die (the same die steel the Mint reported was used for the 1972 T-3 High-Relief reverse dies), in which case a full one-die T-2 run could have produced as many as 200,000 August T-2’s.

“But…but…but you said earlier that the population of the March run was 100,000?”

Yes we did, 100,000 has been the accepted mintage, but the authors have a new observation to bring to the table, the relatively early die-state of Herb’s March T2’s with the largest die cracks!  These must have been among  the last March T-2 Ikes struck before the die failed or was pulled.

Thanks to a tip from Alan Herbert, we have applied Del Romines’ meticulous work on die states in pennies through half dollars, to Ikes:  it is likely Ike dies ripped even more quickly through “Early” and “Middle die States” than Del’s smaller denominations and spent most of their production life in Late Die States:  in rough numbers, 2% in EDS, 10% in MDS, 25% in LDS and 60% in VLDS.

The March release T-2’s with the largest die cracks were still in Middle Die State.  We estimate this corresponds to 10,000 March T-2 Ikes struck if W-1 die steel was used and 20,000 if the reverse die was made from the improved 52100 steel .

Figure 4,   Advanced die crack showing early Middle Die State.  The photo was taken at about a 30 degree angle to bring out the die crack, sharply exaggerating the pulling of die metal from the tops of peripheral letters toward the rim, the hall mark of Middle Die States according to Romines’ research.   Note the absence of significant die flow lines.

Was the March T-2 run purposeful or accidental?  We may never know.  New Ike designs for the more resilient 52100 die steel served to continue the chaos of the first two years of Ikes.  To make matters worse, the Mint expertly confused current and after-the-fact research efforts, kept few records and destroyed most of those.

While one can see the desirability of a full test run to see if a High Relief Reverse die would hold up in a circulation production line, the Philadelphia Mint had a test room to run such tests so why use the production line and then release the March run T-2 “mule” into circulation?  Letting a mule get into circulation is a major stumble.  In fact, the “Mint authorities” persistently denied such an event happened in March and for many months thereafter.  Most embarrassing.  Jobs could have been lost.

The authors feel the March T-2 run itself was probably purposeful, an early test of the new 52100 die steel, but the coins getting into circulation probably was an accident.

So what about the August T-2 run?   Was it an accident, or could it have been purposeful?

Perhaps it was also a test of some sort, possibly a test of an improved version of the 52100 die steel, although why not rely on the extensive High Relief T-3 run for that test since testing a one-die-pair mule adds many uncontrolled variables?  And if a test was desired, why not run it in the test room and then destroy the test Ikes?  By August 1972 the chaos of the early Ike design and production was settling down a bit so it seems less likely that “accidents” of this magnitude could happen.

Could the second T2 run have been a purposeful cover-up of an accidental March run?  Increase the T2 population and dilute the March run as a kind of smoke screen?  Make the T2 look intentional?  Put out a bunch more T2’s while transitioning to the 1972 Type 3 High Relief Reverse?

Maybe not such a stretch:  the authors have published an article proposing the two brief 1971-S SB Peg Leg Ike Design Varieties were purposeful and intended to give the impression that the fading die-state peg leg 1971-SP was also purposeful.  We also wrote a paper suggesting the “R” of “LIBERTY” on the Type 2 Bicentennial Obverse was modeled after the 1974-S Proof “Eskimo Boot” Peg Legs (which on the Type 2 Proof quickly “faded” with proof re-treatments into a Serif-R, a nifty reversal).

It does seem unlikely that both T2 runs were accidental, just too great a coincidence.  The authors suspect the August run was purposeful and we favor a cover-up based on our extensive work on the Ike Series, the other suggestive examples given above and a growing feel for Frank Gasparro as a perfectionist who enjoyed a bit of dark mischief now and then.

Let’s close with this most appropriate introduction to an old radio mystery show (old-timers will get it), perhaps the best answer we can provide for now:

The IKE GROUP proposes that the original high relief reverse design (used for the 71-S and 72-S proofs, the 72-S silver business strike and for the reverse of the 1972(P) T-2) had a shallow incuse crescent just off the earth between 10:30 and 11:30 and several extra lines hovering just above the lunar margins.  We suggest that every ’71 and ‘72 high relief reverse die had these features:   the dies destined to strike proofs were polished, frosted and re-polished thereby erasing the incuse crescent (although a trace of the crescent can be found on maybe 10% of 71 and 72 Ike proofs).  The Shadow image faded on 72-S business strike Ikes along with but faster than the Extra Lunar Lines due to presumed multiple re-frosting treatments that included field abrading/polishing to remove old frosting remnants.

The identical high relief reverse is present on all 1972(P) Type 2 Ike reverses and the Shadow image with the Extra Lunar Lines is uniformly present.

We explain our observations and our reasoning that there are two 1972(P) Type 2 populations, both one die pair:

–         a population released in March 1972 discovered by author Herb Hicks of which 80% have an evolving spidery die crack in ‘STATES” of which the oldest die state is MDS (Middle Die State) and of which none show die clash,

–         and a population probably minted in August around the time of the switch from Type 1 to Type 3 production, of which none have the March die crack but roughly half show the same die-clash pattern including an obverse “Talon Tip” (a small Talon Head image) and reverse die abrasions over the traces of Ike’s Jaw Line to the south of the moon.

Because Herb’s March Type 2 release has no examples in later than MDS we estimate a mintage of 10 to 20,000 depending if the old or the newer more resilient die steel was used (we favor the latter).

The August Type 2 was most likely struck with the new more resilient die steel (the Mint reported the new die steel was used on the Type 3 reverse) in which case its mintage could be greater than the 125,000 average die-life for the usual 1971-72 Ike dies, with a probable outside limit of 200,000 – 250,000 August Type 2’s.