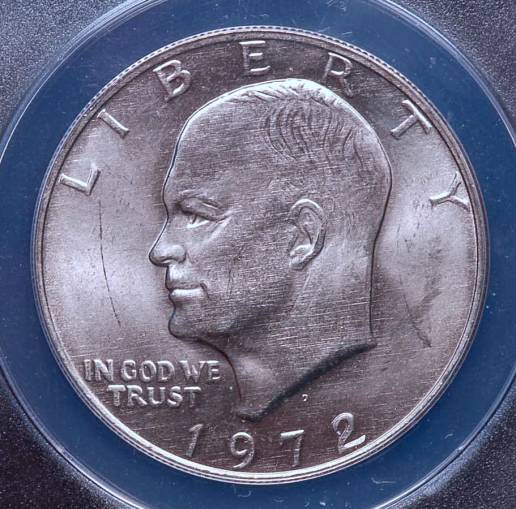 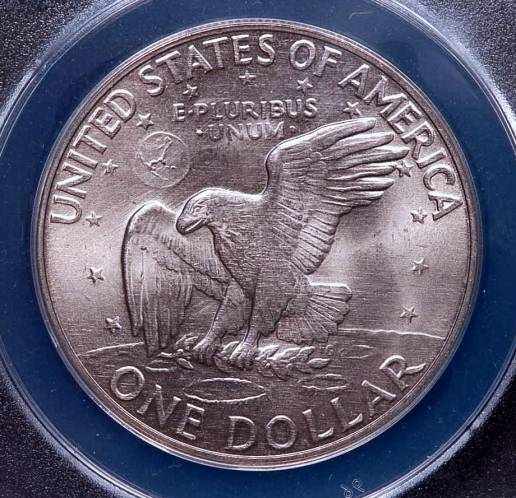 This is a die-clashed reverse with Jaw Line abrasion lines running at about 45 degrees from southwest to northeast, visible over the Eagle’s head.  The Planchet Striations, as on the obverse run roughly horizontal and are deepest and widest over the higher relief sections of the Eagle.

Anyone who has examined Ikes to any extent has noticed that a few CB examples (CuNi-clad Business strikes) have fine parallel “striation” lines across one or both sides of the coin.

These lines may be just barely visible when the coin is tilted sharply to the light, or they may be quite obvious with gentle tipping or even visible with the coin flat.

In this chapter we will examine these lines closely (THE EVIDENCE), lay out our explanation of their cause and touch on their grading impact and incidence.

PLANCHET STRIATIONS, SOME OBSERVATIONS (THE EVIDENCE)

1.  These fine lines are incusive, that is, they are etched into the coin.

2.  They are parallel with some slight variability in some segments.

3.  A given line may be short or may extend across the entire side of the Ike.

4.  They are equally prevalent on obverse and reverse when just on one side.

5.  They are usually present on both sides of the coin.

6.  When on both sides, both sets of lines are exactly congruent (parallel to each other).

7.  The lines are less prominent in the fields and especially the fields in proximity of           central devices.

8.  The lines often climb the inner wall of the rim and continue across the top or the rim       without break. 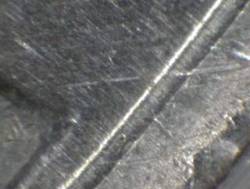 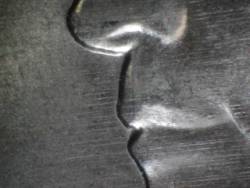 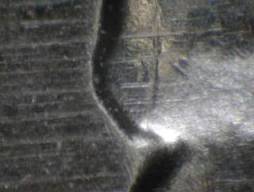 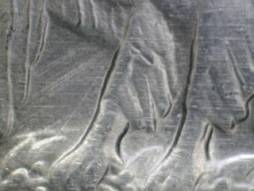 (Upper left photo was taken tilted so the apparent trough is actually the inner surface of the rim of an EDS Ike, showing how this striation climbs the inner rim wall.)

10.  When a prominent line crosses higher device elevations, it usually deepens in depth and expand noticeably in width (lower left, of Ike’s upper lip, a close-up of the upper right photo).

11.  Planchet Striation lines are more common on Denver than Philly Ikes, and more            common in the chaotic first two years.

12.  TPGs holder Ikes with obvious planchet striations and PCGS does not seem to penalize grade-wise.

Ladies and Gentlemen, the evidence is before you, how do you rule?

The authors have come to several conclusions:

–  They are not due to improper cleaning of the coin because such hairlines do not follow abrupt vertical details without interruption since the offending “cleaner” (cloth or brush) must ride over devices with vertical sides like the inner rim, letters and numbers.

–  Similarly, while abrading a working or master hub would also leave incusive striations on the eventually struck coin, the striations would resemble the hairlines left by improper cleaning.  And, they would not be congruent on both sides of every coin with Planchet Striations!

–  Lastly, since struck blanks and planchets are not subject to lateral friction forces anywhere in their travels once stamped out by the blanking press, we must conclude that the striation lines occurred sometime before the blanks are cut out, but when, where, how?

The authors looked for accounts and descriptions in the three (out of print) Ike books with out success.

There are, however, several references in the coin literature to Planchet Striations on Morgan Dollars:  their planchet striations arose somewhere in the process by which the silver ingots that provided the base metal were transformed into sheets for the stamping of Morgan dollar blanks.

The silver ingots were first rolled several times to get the thickness about right, and some authors posit that the rolling process left the striation lines.  Others point out that the rollers would not leave confluent scored striations.  On the other hand, just before going into the blanking press, the silver strip, moving on small rollers, had to pass between fixed, rigid, parallel bars that were set to the exact maximum thickness for Morgan strip.  Since this was not a rolling device, but rather a stationary final thickness rigid correcting gauge, it is likely to have imparted parallel incusive striations to some sections of some of the silver sheets on one or both sides, striations that would be incuse and which would have survived on low-strike-pressure sections of some Morgan Dollars.

The authors agree that the rolling of the silver sheet, even with considerable force, would not impart a rather uniform high-density array of striations:  if anything, in extremes of force, the roller would have left punctuate impressions where random particles were caught between roller and silver strip (like strike throughs).  Even if a roller jammed and collected debris and was then pushed along in front or the now not-rolling roll (like a wheel on a shopping cart jammed on a small piece of debris), the resulting scrapes would be crude and quite variegated with frequent lumps and clumps of foreign matter gouging deeply into the metal as they were pulled from beneath the rollers of the strip.

Returning to Ike Planchet Striation Lines, we know that the CuNi-clad coiled strip starts out as one to three inches-thick layers, the two thinner CuNi outer layers on either side of a thicker copper core.  These three layers are abraded on their touching surfaces as they go into a powerful roller press that exerts so much pressure and heat the layers are literally welded together.  The initial welding pass through the rollers thins the welding ingot to about an inch thick as it comes out the other end.  Subsequent passes through heavy rollers continues to thin the strip until it is the proper thickness for Ike dollars and about 15 inches wide.  Multiple shorter lengths are welded end to end to produce the long, multi-ton coils of strip that eventually get fed into the dollar planchet blanking press.

The heavy coils of Ike planchet metal (13 tons typically) are tightly wrapped and banded for shipment.  And I mean tight!  These coils are shipped roughly by rail and big truck and it would not do for any coil to start pushing out like an onion you’re squishing with a fork, LOL.

At the mint, however, the banding has to be cut to free the end of the roll for insertion into the blanking press.  We suggest the outer wraps of the coil loose their wrapping tension right then and there, partially unwrap.  These outer layers, losing their tension, and unwinding just a bit would rub against each other with enough friction to create fine linear parallel striations that would be congruent on both sides.

An analogy is the un-winding of a coiled clock spring:  in some clocks, over-winding jams the spring as its coils come into contact and through friction refuse to unwind on their own accord.  In the case of a massive coil of metal strip, there is no meaningful elasticity but the tension on the coil as it is wound to keep it tight during the winding, banding and shipping is massive.  It is only when the coil is unbanded that we suggest the outer layers would relax a bit and slide backwards on each other, scoring both surfaces of all the moving outer layers except the last inner-most layer that would be scored only on its outer surface.

We should point out that once the coil is being fed into the blanking press, the coil is kept under steady tension by a small electric variable torque motor that keeps tension at pre-set levels in spite of the coil’s decreasing radius as it is consumed by the blanking press.  Was this steady-tension mechanism necessary to prevent further coil slippage, or to keep constant tension on the sheet as it is pulled through the blanking press?  Or both?

As mentioned under “EVIDENCE”, PCGS seems not to down-grade Ikes with Planchet Striations.  We have seen several MS66 Denver Ikes with striation lines and one MS67 recently.

We hesitate to estimates the prevalence of planchet striation bearing Ikes, but since you paid good money for this book, we feel obligated:  perhaps somewhere around two percent of 1971 and ’72 Denvers?  Of those, perhaps five to ten percent have strong lines?  Thus, of these ’71-D and ’72-D Ikes which have the greatest percentage of planchet striations, those with noticeable Planchet Striations are in a distinct minority, about one in 50:  those with heavy striations are rare, about one in 500.

Are Ikes with heavy Planchet Striations collectable?  Heck yes!   These are visually interesting Ikes with an interesting story.   Just don’t expect to make a profit in their resale in any hurry. .