The Beginning of the End?

The Beginning of the End?

Just a quick author’s note, if you will, about the state of top pop Eisenhower dollars, and by extension top pop moderns as well.

In recent weeks a number of once-thought elusive top-pop coins have been made in the Ike series. I likened the situation to an all-out assault on vulnerable high-end populations for modern coins across the board. Collectors who pay attention to such things, especially those with a major investment in high-end modern coins have noticed that several of the coins have been made by the one dealer and some have questioned the strength of these particular coins.

To confer upon the situation a feeling of impropriety on the part of this particular dealer or the grading services with no evidence of wrongdoing whatsoever, would be irresponsible and I am not going to go there. But what I will say is that this type of strategy on the part of a coin business is not all that revolutionary and should not be unexpected. We as modern collectors have had the good fortune of “owning” our series for quite a while and have made many of the great coins ourselves. Our small community is getting larger. Industry is creeping in. What is changing is the type of coins that end up in high-grade holders and the market value some coins at this level will command on the market. For those who are serious about owning world class coins, this should not distract us from the job at hand.

To put it simply, instead of being concerned about a loss of equity stake due to grade inflation or the possibility of the top-pop landscape drastically changing, consider your true goal.

If you want the top registry set and care nothing except for the grade on the holder- then there will be no shortage of options waiting for you to invest in such a goal.

If you collect high-end Ikes because you have a passion to have the best coins in the series, then you have to see the registry set for what it is: a marketing construct. It is not religion and it is not without its flaws.

The fact of the matter is: the most desirable coins of any issue are not necessarily the highest graded coins in plastic holders.

Consider this scenario: A 66 plus coin gets made with uniform mint set yellow toning. It is a coin of unexceptional eye appeal in every way accept for the lack of annealing marks around the rim. It is an accurately graded 66, maybe even a strong one. It is no 67. The second coin is a 66. Not a plus coin. At least not in the eyes of the grading services. The coin has one of a kind, natural and attractive toning. It is a standout piece with exceptional eye appeal. Which of the two coins do you want to purchase?

The answer says more about your approach to collecting than about anything I can tell you about right or wrong strategies in coin investing.

In the last piece I wrote for The Ike Group site, I mentioned that money is going to be made in plus coins. The good news is even if no new material entered the marketplace (impossible) that there are plus coins already in holders and that eagle-eyed Ike dollar collectors could cherry these valuable coins at current depressed market levels and make a tidy profit. All it takes is for the grading services to be willing to hand out the grades. Let me say this, the coins that are being made now, almost weekly in the high-end of the business strike Ike dollar spectrum are evidence that PCGS is handing out the grades at the moment.

This upgrade gravy train will not last forever. Good opportunities seldom do.

And you know what else? Spectacular Ikes will never flood the market. It’s not that kind of series. It never will be. 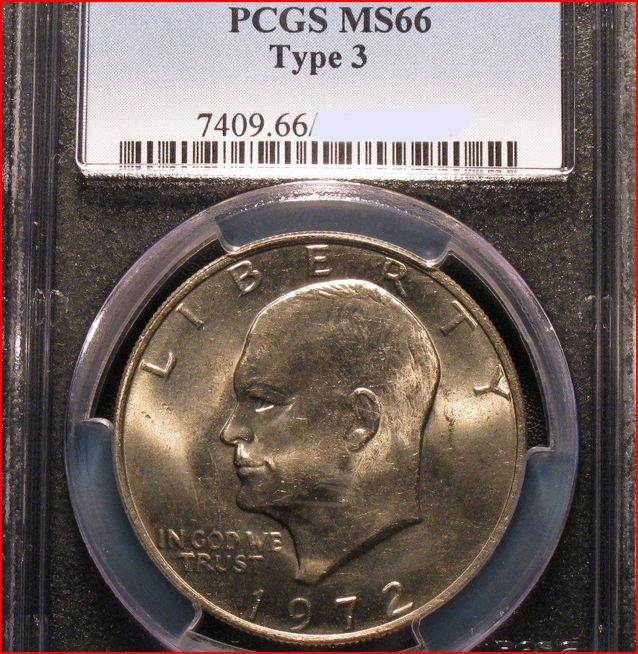 A recently graded top-pop Ike in a PCGS holder.  Would you buy this coin with total confidence in the numbers on the label?