By Charles Morgan and Hubert Walker

Have you ever seen this Eisenhower proof box? If so, you may want to check for a potentially valuable variety.

After going unnoticed for more than forty years, a rare early Eisenhower dollar variety has emerged. As of right now, we’re calling it the Nixon Presentation Dollar. In this column, we’ll retrace our steps, tell you what we know about the coin, and speculate about what it could potentially tell us. It’s numismatics in real time, where researchers have only a coin, a box and some leads to go on. Two things we do know are that this coin represents a breakthrough in the study of the 1971-S Eisenhower dollar and is the only die-marriage mule yet known of an Eisenhower proof.

Discovered by numismatist Andy Oskam, the Nixon Presentation Dollar was found housed in a cardboard wood grain box similar to the standard “Brown Pack” silver proof box used from 1971 through 1974. Unlike those boxes, however, this one has a large metallic Presidential Seal on it and a golden facsimile of President Nixon’s signature.

Intrigued by the unusual box, Oskam placed a strong bid for the coin on eBay and won it for a sum well in excess of the typical brown pack Ike’s market price. The coin was advertised as a DDO (doubled die obverse), which isn’t uncommon for the date since there are many known doubled dies. Most carry no discernible premium.

The coin’s consigner also claimed that the piece was distributed at a presentation ceremony, with President Nixon and Mamie Eisenhower, President Eisenhower’s widow, in attendance. The design of the box, with its metal-stamped seal and golden signature, seems to support this claim, but as of yet neither the U.S. Mint, the Richard M. Nixon Presidential Library, Coin World, nor any other source we’ve talked to (including multiple experts in the field of Eisenhower dollars), could speak with any degree of certainty about the box or the coin.

The one date that comes to mind in regards to the public unveiling of the coin and associated memorabilia with both the President and Ms. Eisenhower in attendance is January 15, 1971. That day, there was an event at the Dwight David Eisenhower Republican National Center in Washington, D.C.

In a transcript of Nixon’s remarks taken there (available online at the University of California Santa Barbara’s exhaustive American Presidency Project website), the President is reported as joking, “I don’t know whether there was any significance in the fact that they gave the dollar away before I got here”.[1]

An annotation supplies the following information: “Mary T. Brooks, Director, Bureau of the Mint, had presented a bronze model of the designs on both sides of the Eisenhower dollar to Mrs. Dwight D. Eisenhower. Representative Rogers C. B. Morton of Maryland, chairman, Republican National Committee, then accepted the model from Mrs. Eisenhower for display at the Center.”[2]

Unfortunately, neither the records provided by the Nixon Library nor the report published in Coin World at the time mentions the coin at all.[3] It’s an issue that needs further research, and hopefully someone with first-hand knowledge of the event will come forward.

Provenance and alleged backstory aside, the piece is significant because it is the third instance of a 1971-S Ike dollar proof discovered with the low relief reverse typically found in 1971-S silver-clad and Cu-Ni clad business strikes and some 1972 Cu-Ni clad business strike coins. The first two were discovered in 2007 and authenticated by ICG. At the time, no reference was made to any unusual packaging, and since then no other pieces have been found. It’s still unknown whether the Nixon Presentation Dollar and the two prior coins were struck from the same die pairing.

One possible sign that they weren’t comes from the Ike Group’s determination that this new specimen doesn’t share the same DDO as the first two, but instead reveals the diagnostics of the collectible doubled die variety referred to in the Cherrypicker’s Guide as FS-103.[4] To date, PCGS has certified a mere seven of this variety, while NGC has certified 21.[5][6]

The coin will be sent to PCGS for review and attribution next week. We’ll provide an update on PCGS’s opinion in the next edition of Numismatic Housekeeping. 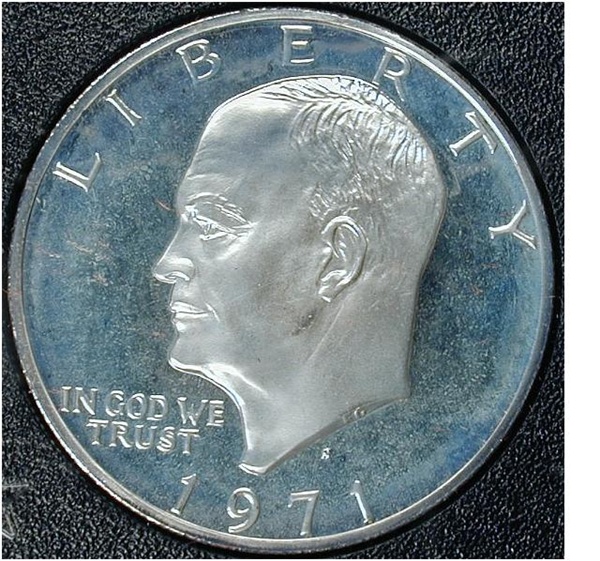 A typical milky white Eisenhower proof in Original Government Packaging, or so it would seem. 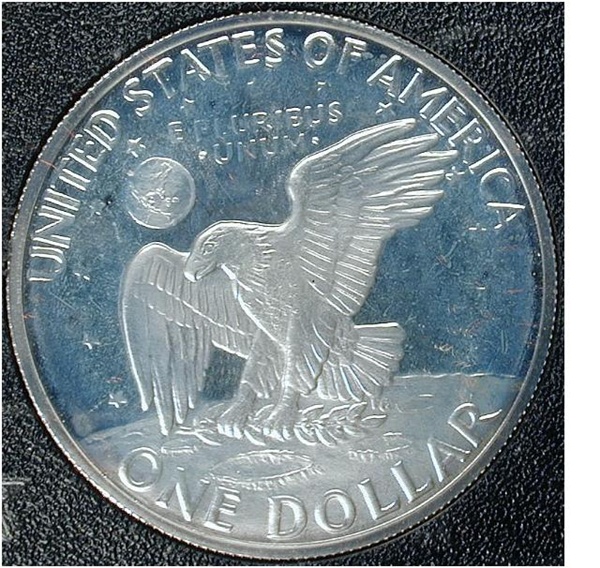 The low-relief reverse should be a naked-eye pick-up for those familiar with the series… that is, if you were looking for it!

The great thing about a coin like this is that it poses a multitude of questions. Even the most expert numismatists operate under the assumption that they haven’t seen it all. The study of any coin is, in some respects, an exercise in forensics. In this instance, the only concrete facts we have to go on are an unusual case and an unusual coin. To figure out exactly what this coin is and when it was distributed gets to the core of what numismatics is all about. It’s a process that will occupy the Ike Group for the next several months.

But to reach the point of knowing what it is, Eisenhower dollar researchers will have to seek answers to the following questions:

A unique government box with a fascinating story proves nothing. Although the signature and seal are tantalizing clues, they could just as easily be red herrings.  How many times in auction history has a seller “embellished” the story as to how he or she came upon a supposedly rare and one-of-a-kind item? Without proof or documentation, the box is little more than an interesting novelty. Intriguing, and possibly quite rare, but in and of itself it’s nothing more than a box bearing the reproduced symbols of high political office.

One expert we reached out to wondered if the package might have been made as a special souvenir offered at a Mint gift shop or sold through some special arrangement via a third party distributor.[7]  But even if a scenario like these proved to be the case, the number of pieces distributed in this package must be low. Even if 2,000 were made, surely many would have made it to market by now. If 500 were made, would one of the “experts” have known about it? We currently have queries in with the U.S. Mint Historian to see if they retained any documentation concerning this issue, and a researcher at the Smithsonian has agreed to go through the archives to see if they can determine the provenance of this special packaging.

Coin World reported the existence of two Proof 1971-S Eisenhower dollars with a reverse used for uncirculated coins. Those two coins were DDOs as well.  Were they also FS-103s? Did they come out of the Nixon box, too? In other words, is the box in its original state diagnostic for the existence of this specific coin?

If the three coins are the same, does this box give us a clearer understanding of what it is that we’re dealing with? Are we getting closer to an explanation as to why these coins exist? The article in Coin World states that the low relief reverse die was used by accident. Can we confirm this?

If they’re the same, and it’s possible that they are, then this coin would be a fantastic addition to the Cherrypicker’s Guide. It’s an exciting, collectible, visible-to-the-naked-eye variety of the highest order.

Let’s assume, for the sake of the question, that this piece was distributed at a public unveiling of the coin. Would that unveiling have occurred before the issue went into full production? The January 15 date seems too early, but production difficulties did stall the release of the silver proof Eisenhower dollar until later in the year. If presentation strikes were called for and the Mint wasn’t fully prepared to manufacture high relief proof coinage, they might have used a low relief reverse that would strike up fully for the presentation.

If this particular example was intentionally struck, would it be a pattern the same way the “Cheerios” Sacagawea dollar is a pattern? While the “Cheerios” Sac reverse never went into production, this Ike features a production reverse, albeit one that was never meant for proof production and was never used again. If the coin was the purposeful cross-breeding of two incongruous die partners, is the coin a pattern or a mule? An affirmative for the pattern proposition would be a major discovery.

It’s been proposed that there are multiple different obverse dies that carry the basic pattern of FS-103 doubling. Will Oskam’s Nixon Presentation Piece share die markers with other attributed FS-103 Ike dollars? Or will Oskam’s piece feature unique die markers while retaining all other FS-103 die doubling diagnostics? A “yes” to any of these questions shines a new light on this collectible doubled die.

The coin begs more questions than it answers, and ultimately the question of its origins won’t be settled for a long time. The low relief reverse could have been selected, polished up and used all by accident. Has that been proven or is it just speculation?

Short of Mint personnel coming forward with first-hand information, or official records pertaining to the coin’s distribution being made public, we can’t say with certainty why the coin combines an obverse and a reverse that were never meant to be together.

In the meantime, enjoy the new discovery and realize that numismatics is a never-ending process of research and revelation. There’s always a chance to uncover something new.

Our thanks and gratitude goes to Bill Gibbs, Steve Roach, James Sego, Mitch Spivack, and the staff at the Nixon Library for help preparing this article.

Flip of a Coin:

The passage of legislation authorizing the Eisenhower dollar was no easy matter. Plans to debut a coin featuring the late President’s likeness were underway shortly after his death in April, 1969. By October, debate raged in the House over the proposed metal content. Plans to unveil the coin in time for Ike’s birthday were dashed when the bill fell 30 votes shy, with more Republicans voting “no” than Democrats. Representative H. R. Gross (R-Iowa) said that “[Congress] would be doing the memory of President Eisenhower no favor to mint a dollar made perhaps of scrap metal.”[8]

Why did Gasparro’s portrait have more hair than the real-life Eisenhower? At a test strike presentation on January 25, 1971, Chief Engraver Frank Gasparro explained that he “had to add the hair because when you strike a coin the luster on a bald head shines prominently.”[9]

With the release of the Five Star General Commemorative dollar in 2013 and the Eisenhower Presidential dollar in 2015, President Dwight D. Eisenhower becomes the first president commemorated on four different dollar coins. President Washington, however, remains the most celebrated figure on United States federal coinage, having graced the quarter since 1932 (and both sides of the New Jersey State quarter), the Lafayette dollar of 1899-1900, the Washington commemorative half dollar of 1982, the 2007 Washington Presidential dollar, and Laura Fraser’s five dollar gold commemorative of 1999.

[7] Author’s note: Usually we’d cite, but this time we feel that it’s best not to reveal our source since his input is best described as a guess.